by George E. Bentley, Waterford, VA
Reprinted from the Waterford Foundation Booklet of 1958. 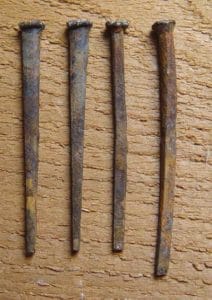 Handmade (wrought) nails, of soft malleable iron with rectangular shanks, drawn by hammer blows to a point were used in house construction from time immemorial until about 1800, when cut nails superseded them.

Numerous patents for nail cutting and heading were issued from 1786 on. The combination machines that cut and headed in one operation were not efficient and in general use until about 1817-1820. Jeremiah Wilkinson of Cumberland, RI., is credited with cutting tacks and later nails from sheet metal from about 1775.

The wrought iron nails were used until about 1850 for "clenching" to stand the jar in facings of window shutters, battens of doors and the overlay of boards (old style) in lathed room partitions. They are not however typical of nails used in general house construction, after 1800.

After 1825, with the use of machines that both cut and headed nails, the shank was similar, but the head was stamped level, the top being impressed by a single blow.

Nails: Clues to a Building's History