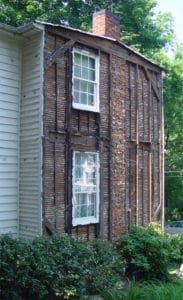 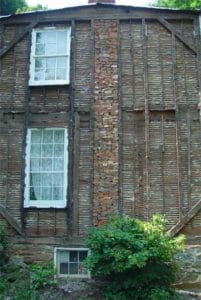 In 1833, a breakthrough in building technology revolutionized the construction of private homes, making them affordable to middle- and low-income families and ultimately allowing the proliferation of suburbs nationwide over the next 150 years. This innovation was the balloon-frame house.

Home construction previously was arduous and expensive. Houses were built using stout pieces of lumber fitted together with heavy joints. For example, the traditional New England frame house was built using hardwood beams connected with mortise-and-tenon joints fastened by hand-cut dowels or hand-wrought nails. An entire frame wall was fitted on the ground and then lifted into place by a crew of about twenty laborers. These homes were durable but expensive and unwieldy to construct, requiring much labor and the expertise of skilled craftsmen.

Then the balloon frame was developed, making its first appearance in Chicago. Partially a result of the incipient industrialization occurring in the young nation, the balloon frame was based on much lighter precut two-by-four-inch studs positioned sixteen inches apart and held together by factory-produced nails. Although light, the frame was very strong and able to withstand heavy winds, since the stress was spread over a large number of studs. The factory production of nails and mill cutting of standardized lumber reduced costs and increased availability of materials to individual builders. These houses were constructed quickly and easily, requiring only two workers using basic carpentry techniques. The method allowed many urban workers in America to build their own homes, in contrast to Europe where traditional construction techniques kept the rates of home ownership low for most of the nineteenth century. 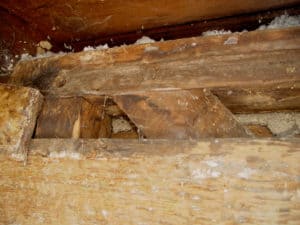 Example of pegs used to hold beams together.

Over the next few decades, home building was transformed from a specialized craft into an industry, as entrepreneurs produced house plan pattern books and even prefabricated building materials in mass quantities based on the balloon-frame method. Throughout the country, single-family homes became affordable to Americans who were previously unable to purchase what had been a luxury. Balloon-frame construction has persisted, with most homes today, whether stucco, wood, stone, or brick, based on this method.

• Solon Robinson, a farmer and writer from Indiana, was the first person to advocate in print the use of the balloon frame and favored using nails throughout the frame. His 1846 article, “A Cheap Farm-House,” proposed the balloon frame for the new settler, with tenons used only in the sills, and 3x6 lumber.

• Originally called “Chicago construction” until the 1870s, the balloon frame was a derisive term for this unusually light form of construction. The structural principle that differentiates the balloon frame from other forms of timber frame construction centers on the way the frame addresses the loads. In a balloon frame, there is an equal distribution of vertical compressive loads over a series of 2x4 or 2x6 inch studs. The studs are spaced approximately sixteen inches on center but often vary between twelve to twenty-four inches. Unlike the self-supporting bay system of the braced frame, the one or two-story continuous stud system of the balloon frame did not utilize the girdling support of connecting horizontal beams (girts) tied into stout corner posts; hence, the frame required lateral support from the wrapping (diaphragm) action of the sheathing to make the frame rigid. Later in the development of the balloon frame the sub-sheathing was nailed diagonally to further counter the racking of the frame.

• Gervase Wheeler, Homes for the People in Suburb and Country, 1855.

• George Woodward, engineer, publishes in a farm journal, The Country Gentleman (Apr. 5, 1860), an isometric perspective view of the balloon frame, and is the first person to refer in print to both kinds of balloon frames. Material on the balloon frame was later published as a chapter in his book Woodward’s Country Homes (1865). Prefers the all-nail version over the Chicago type with its large sills framed into each other and finished with mortises for the studs and joists. Lyman Bridges, Building Materials and Ready Made Houses of 1870, advocated prefabricated houses generated off of pre-mortised sills (to house joists and studs) measuring 6 x 6 to 10 x 10. The Chicago system of balloon framing would last to c. 1888.